“How can I impress on you the importance of the situation?” Sal asked.  It was hard to take Sal seriously while he was sitting there with a Mickey Mouse ear hat and the remnants of two dogs with the works scattered in his beard.  I’ve known Sal all my life, and that pretty much summed his world up in one mini scene.  “Are you paying attention to me?  God, you can be such a space cadet.”

“I’m totally with you Sal.  I’m just not getting you.  Sort of like that whole thing about Cialis where you take the pill to have sex, but their logo is two people holding hands in separate bathtubs.  Like that’s going to get you lucky how?”  See, I can make analogies that put Shakespeare and Donald Trump to shame.

Sal leaned forward and kept his voice kinda low.  Well, low for Sal.  “That’s a whole separate but equal contention about sex where you must always ask before you hit it.  Sort of like you wouldn’t force someone to drink tea, would you?”

“God, you’re hurting my head with the questions.  Look it up on YouTube.  You need more education.”  With that Sal became quiet.  His lips moved like he was reading the Reader’s Digest to himself.  I could almost make out his words.  It was something on the order of “Man went into the jungle to catch a tiger by its toe, like for reals, and when he came back out he was missing most of his own toes since the tiger ate his foot.”  Either that or “Fan of the bugle caught a tired joe, like for reals, then he came back missing most of his own foes since the bugle played a toot.”  It was something like one of those two.  Honest.

Finally Sal’s eyes perked up.  “That’s right, now I remember.  I need to borrow five Benjamins.  You know I’m good for it.”  Sal beamed with pride that he had remembered.

“Really man?” I asked.  I tried out my trust-o-meter, and the hotdog remains in Sal’s beard seemed more trustworthy.  “That’s like, almost five hundred dollars.  That’s a lot of Cheetos.”

“It is five hundred dollars, and don’t you mean a lot of cheddar?” Sal asked.

“I hate cheese.  That’s why I put Cheetos on my sandwich.  It’s the whole lactose intolerance thing.”  I patted my belly to emphasize my point.

Sal pointed to the glass of milk in front of me.  “Then why are you drinking milk?” he asked.

I smiled since I had anticipated the question.  “That’s what they call a misnomer.  I saw on a television commercial that milk isn’t lactose.”

Sal shook his head in disbelief.  “My God, you can be such a space cadet.”

I nodded in agreement.  “I applied to the NASA call for astronauts.  They even called me personally to let me know I would be called about the job in just over a thousand years.”

Sal put his hand over his face.  He looked almost exactly like Patrick Stewart at that moment, except Sal had curly black shoulder length hair, wasn’t wearing a unitard, and wouldn’t touch Earl Grey black tea if Earl Grey had promised a quickie in the oil of bergamot vat.  I missed my vat of oil of bergamot.  It brought back a flood of memories that made me feel sad enough to shed a tear.

Sal saw that tear and focused on it so much it almost popped like a pimple.  “Why are you crying?” he asked.

“I just need a moment,” I said.  I had a long pull on my ice cold milk and let out an “ah” as I finished.  I left the milk mustache there to give Sal’s beard a face buddy.  “There, that’s better.  So what did you want?”

“Never mind,” Sal said as he stood up.  “It’s just not worth it.”  He stomped off in his purple Crocs, bits of onion falling from his beard, leaving a trial of onion crumbs behind in case Sal had to reground himself in my presence.

I just smiled and waved at his back.  I thought about wiping off my milk mustache, but thought better of it.  It was my trophy in this battle of wits.  I still had my money, and Sal wouldn’t ask for anything from me again until he gets back into the alcoholic potatoes, but that is another tale for another time. 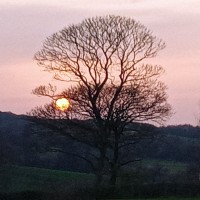